During the summer of 2021, the third extension of the Chamrousse bowl was under construction ; the perfect opportunity to lend a hand, discover the DIY world and make a video at the same time.

In total there were people from more than 10 different countries in the team and without counting the locals there must have been about 30 of us there, the good mood was there! Among the associations present were M16 LPTB (Let’s not drop the concrete), TOTEM and WAW (Wonders Around The World).

To find out more about the project, I decided to interview Léo, a native of Grenoble and volunteer with WAW (Wonders Around The World) an international, independent, non-profit organisation whose aim is to make skateboarding accessible worldwide, by developing skateparks in areas of the world where they are not present. But Leo advised me to interview Mike; a local legend who is too often forgotten and yet is the precursor of the project.

I asked him some questions about the Chamrousse extension project, the origin of the project and also about the three associations present: WAW, M16 and TOTEM.

Hi Mike, can you tell us more about this project and the three associations involved?

Hi, Totem is an association that I created in 2007 in Chamrousse in order to organize musical, cultural and sports events. M16 is a Grenoble association chaired by Thibaud Vital alias “shoobi” whose aim is to build skateparks in the Rhône Alpes region. The participation of Wonders around the world in this project is due to Léo Poulet and Elliott Auffray, originally from Grenoble and volunteers for several years with WAW.

When and how was the Chamrousse project born?

The project started in 2014. With Totem I presented the file to the municipality with the aim of concretizing and building a bowl at 1700 meters of altitude via a participative construction site with the M16 crew. The work began in June 2015, and it took us five months to complete the first phase. In 2019, we decided with the crew to enlarge the spot in partnership with Wonders. In 2021, the third and last phase of the work started in May and was completed at the end of July thanks to an incredible team.

What were the agreements with the town hall?

The provision of the land and the necessary equipment, the purchase of raw materials, accommodation and food for the volunteers, and the full management of the skatepark by the Totem association.

What problems did you encounter during the construction of this extension?

Rain, mud, cold and fog for three weeks in July which is quite rare in this period.

How did you manage to gather so many people on this project?

The notoriety of the spot and especially Leo’s address book.

Do you have one or two anecdotes to tell us?

In 2019, the municipal policeman (former gendarme) with a more acute overzealousness than normal, broke our balls EVERY DAY on the building site for trifles and ended up getting fired because he was stealing petrol from the municipality… well done for his face!

Otherwise, the evening of the inauguration on 31 July 2021, only those who were present can testify to the mess we made. (I can confirm that the station was turned upside down).

For outsiders who want to go there, what advice/recommendation would you give them?

Diy spot made by skaters for skaters… roll who can. Scooter and rollerblades forbidden Skate and triton only !

If you come in the summer, don’t forget your swimming costume, your hammock and some beers.

Thanks for your answers, any last words to conclude?

A big thank you to all those who came to help us and there were at least a hundred people.

Thanks to all the people present for their welcome and their good mood, special dedication to Mike and his fabulous cooking which regaled us all and Eliott for the accommodation.

One last word : SKATE & TRITONS ! You can find the video right here : 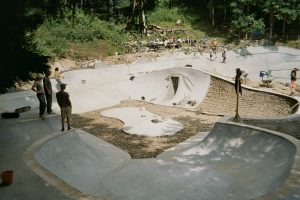 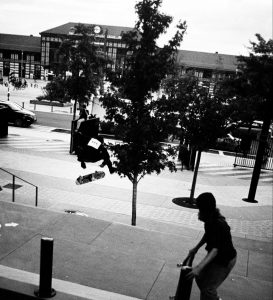